How might we enable students to grasp mathematical concepts and make their learning durable?  One approach is to use the sequence of Action-Consequence-Reflection in lesson activities:

The ACTION can be on a graph, geometric figure, symbolic algebra expression, list of numbers or physical model.  Technology can be used in order to have a quick and accurate result or CONSEQUENCE for students to observe.

The REFLECTION component is the most important part of this sequence; without this, students might not pay attention to the important math learnings we intended for the lesson.  They might remember using calculators, computers, ipads, or smartboards, but not recall what the tech activity was about.  And if they did learn the concept in the first place, the process of reflection helps make the learning stick—it is one of the cognitive techniques shown to make learning more successful.*

Students can reflect in many ways: record results, answer questions, discuss implications with classmates, make predictions, communicate their thinking orally or in writing, develop proofs and construct arguments.  The intended (or unexpected) learnings should be summarized either individually or as a class in order to solidify the concepts, preferably in a written form.**

In my one-on-one work with students, we often fall into the “procedural trap” in which my students just want to know “what to do” and don’t feel that the “why it works” is all that important (I’ve written about this before here). Also, our time is limited with many topics to cover.  But this past week, I was able to sneak in some Action-Consequence-Reflection with two students because they had mastered the prior material and were getting ahead on a new unit. It was a great opportunity to have them discover a concept or pattern for themselves, far better than simply being told it is true.

For each of these, I used a simple REFLECTION prompt:  What do you observe?  What changes?  What stays the same?

We used a TI-84+CE to investigate the polynomials.  We began with the even powers on a Zoom Decimal window, and my student noticed that higher powers had “steeper sides”.  I asked “what are the y-values doing to make this happen?” and we noticed the y-values were “getting bigger faster”.  We then used the Zoom In command to investigate what was going on between x = –1 and x = 1, and noticed that higher powers were “flatter” close to the origin because their y-values were lower. 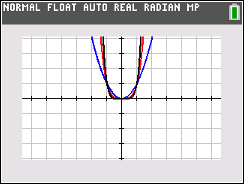 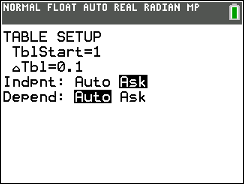 Setting the Table features to “Ask” for the Independent variable but “Auto” for the Dependent made the table populate only with the values we wanted to view. Fractions can be used in the table, and we used the decimal value 0.5 for number sense clarity. Another observation was that the graphs coincided at three points: (1, 1), (0, 0) and (–1, 1).

In fact, none of this was what I “intended” to teach with the lesson, but it was mathematically interesting nonetheless, and my student already had a deeper appreciation for the graph’s properties. We moved on to the odd powers, and the same “steep” vs. “flat” properties were observed:

All of this took just a few minutes, including the detour at the beginning that I wasn’t “intending” to teach.

Student #2: Interior and Exterior Angles of a Triangle, Geometry

We began with a dynamic geometry figure of a triangle which displayed the measurements of the three interior angles and one exterior angle.  I asked my student: “What do you notice?” and “what do you want to know about this figure?”  We dragged point B around to make different types of triangles.

This motivated my student to wonder about the angle measures; he was familiar with Linear Pair Angles, so he noticed that ∠ACB and ∠BCD made a linear pair and stated they would add up to 180°.  I then revealed some calculations of the angle measures, which dynamically update as we changed the triangle’s shape (the 180° in the upper right is the sum of the 3 interior angles).  What changes? What stays the same? 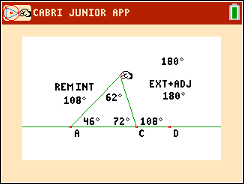 We noticed that both sums of 180° were constant‡ no matter how the triangle was transformed, but the sum of the 2 remote interior angles kept changing, and in fact, matched the measure of the exterior angle.  My student recorded his findings in his notebook, and then I asked, “can we prove it?”.  It was easy for us to prove the Exterior Angle Theorem based on his previous knowledge of the sum of the interior angles and the concept of supplementary linear pairs.  This student loved that he had “discovered” a new idea for himself, without me just telling him.

Even though these concepts are relatively simple, I feel that using a technology Action-Consequence activity made the learning more impactful and durable for my students, and I believe it was more effective than just telling them the property I wanted to teach. It took us a few more minutes to explore the context with technology than it would have to simply copy the theorems out of the book, but it was worth it!

*For a full elaboration of cognitive science strategies for becoming a productive learner (or designing your teaching to enhance learning), see Make It Stick: The Science of Successful Learning by Peter C. Brown, Henry L. Roediger & Mark A. McDaniel, 2014.  Website: http://makeitstick.net .

**Written summaries allow students to Elaborate and Reflect on the learning, two more of the cognitive strategies.  In addition, by insisting that students record the results of the work, the teacher sends the message that the technology investigation comprises important knowledge for the class.

†Making predictions is a way to formatively assess my students’ understanding.  It also is a form of Generation, another cognitive strategy that makes the learning more durable.

‡This is an example of an invariant, a value or sum that doesn’t change, which are often important mathematical/geometric results.

Here are the two activities discussed in the post. Note that the Geogebra file for Power functions has the advantage of having a dynamic slider, but students won’t view the graphs at the same time, so won’t notice the common points or the graph properties between –1 and 1.